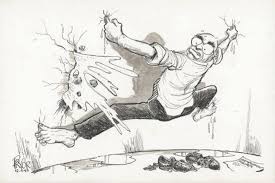 The fable of the Dutch boy (no irony intended- on second thought, irony intended!) who had to work frantically to plug with his fingers the leaks of a dyke on the verge of collapse, seems relevant to Willow Creek Community Church (WCCC) at this time. The truth is leaking out in spite of systemic efforts to keep it contained. It is like new wine in old wine skins, bursting out of the container as it seeks the freedom of truth.  It is inevitable, as the above verse describes. There is no holding it back. Truth is like water that will persistently search for a way of escape.

So why do foolish men and women instead try to hide it? They fear that the dam will break, the foundation will collapse, and what was a shiny, though infected, church, will be no more. And maybe it should, if those who lead it are unwilling to do a course correction and focus the church on a path of honesty. You cannot build your house on sand. You cannot ignore the infrastructure of hiding while you seek to hold forth a public image that is like a white-washed tomb.

The Willow Creek Community Church world was rocked again by new revelations of sexual abuse allegations against Dr. Gilbert Bilzekian, the inspirational founder of the church and mentor to Bill Hybels. These abuse allegations were brought to the leadership of the church 10 years ago, and the repression/suppression machinery went into overdrive, going so far as destroying the evidence that it had been presented with by Ann Lindberg, the victim of this abuse. The Elder Response Team, who dealt with the allegations, acted like they were going to do something to limit Dr. Bilzekian’s ability to teach or lead, but he continued to be used in various ministries. Real evidence of Dr. Bilzekians’s inappropriate relationship with Ann was destroyed by Scott Vaudrey, the head of the ERT. In a criminal court this would be equivalent to tampering with evidence and obstruction of justice. But the lame excuse used was that this was SOP at Willow.

Ann Lindberg experienced a number of tactics, consistent with other victims at WCCC,  whereby she was treated poorly, excluded from ministry opportunities, as well as being  essentially labeled as a racist by a staff member because she proposed a response to a hypothetical question about prejudice that the staff member decided was an indication of racist tendencies. She was told that until she could free herself of her racism she would not qualify for ministry opportunities. This staff member was a rabid disciple of Bill Hybels’s focus on racism, and apparently could see racism in others.These and other tactics were used to abuse Ann at WCCC. She went from loving the church and growing as a believer, to living in fear and hyper-vigilance, as all sense of safety evaporated for her. She continued to come as she loved the church and wanted to continue with involvement. She believed that she was being monitored when she was at the church. All of this added a sense of traumatic anxiety to her experience at WCCC.

Only Admit Sins When You Are Being Forced To Do So

The church has hidden multiple staff problems, from sexual indiscretions to theft of church money, all because of a culture of wanting to look good at the expense of the church’s corporate integrity. The church has created a culture of adultery, whereby the very dynamics of the church’s fear driven emphasis on perfection leads to the frequent acting out behaviors of its leadership and staff. I will blog more on this “culture of adultery” concept in another blog.

If WCCC had a parliamentary government structure, we could call for a no confidence vote as it relates to the Elders and the leadership. The leadership has always been secretive, following some undisclosed strategy to guide the church, but not letting anyone know what is guiding their decisions. I talked to the Elders back in November of 2019 and they were going to get back to me with a clear Biblical rationale for how they are handling the failure to call out the sin of Bill Hybels and not treating the victimization of multiple women with a deep sense of brokenness and confession. I am still waiting their reply.  They have been spending money on investigative reports, and a senior search organization, as well as expert consultants. They have not been able to identify a senior pastor, essentially going back to the drawing board now looking at 6 new candidates.

Many people have lost trust in the Elders ability to lead. There literally is no oversight body to investigate what the Elders are doing and why. WCCC has gone from the autocratic leadership style of Bill Hybels to a group of Elders who have been tasked with leading the church out of the swamp of sin. How does anyone know if they have the expertise to lead at this point? There is no one to look at what they are doing and why.  It is back to the mantra of the past. “Just trust us!” I do not know about others, but I do not trust a blind driver to not drive me over the cliff.

Why do they not, in intimate detail, share their strategies and methods of leading? As has been stated elsewhere, they are cut out of the same cultural cloth that has existed at WCCC for years, where the congregants are supposed to assume that the leadership knows what they are doing. Is is time for the people to stand up and demand accountability from the Elders? I believe so. They are stewarding the tithes and offerings of attenders. I and others have offered to come alongside the leadership as consultants but have been ignored. Many who have asked for feedback from the Elders have been ignored. WCCC looks like a ship that has lost its rudder. Steve Gillen is leaving. The two final candidates, after a long period of vetting, are not acceptable and the Elders will not tell why. It would be informative of what the Elders are looking for if they would share what made the final candidates unacceptable. But the leadership has the arrogant belief that the commoners, the attenders of WCCC, cannot handle the truth. Someone has to step up and provide oversight of what these Elders are doing and why.

Confess Your Sins So You Can Be Healed (James 5:16)

The clear admonition to confess, repent, and seek the healing of forgiveness has been stubbornly ignored by WCCC leadership. There is a rationale for why confession is essential before healing can occur. The very fact that one confesses shows that they have turned from a pattern of hiding and denying sin to admitting to it and seeking forgiveness. Sin is like moss. It multiplies in the dark cold places of our heart. Confession indicates that we are committed to living in the light of full exposure, so that the shame of hidden sin cannot have its power over our lives and the life of our church. To confess, we need to fully embrace grace, knowing that when we are honest before God he will cover us with His grace and forgiveness. God calls for a broken and contrite heart, in order for full healing to start. WCCC style of letting truth come out in drips and drabs, and only when forced to, is never going to allow full healing.

WCCC’s strategy is not working. Failing to have a deep corporate cleaning of a culture of secrecy and protection of image is resulting in a continual decline of the church. It is like the saying “Nero fiddled while Rome burned”. Only it seems like at WCCC it is more like the Elders continue to gather information and strategise in secret while Willow erodes. What about a “novel” radical strategy like commitment to the truth, the whole truth, and nothing but the truth! Trust the truth, because unlike the dark secret cellar of suppression that WCCC finds itself in right now, the truth sets us free.